Lovers of dogs and music rejoice! I will return to Australia with my newest show, Fur Baby. Explore with me what it means to become and be a fur mama (or papa!) in this original cabaret with music, guaranteed to make you laugh and wonder at our special relationship with the canine kids.

Dear  community and fans Down Under!

I am very sorry not be able to come to Australia in 2021 to perform my newest show for you.

So let’s focus on my 2022 return, I am very much looking forward to see you all again!
Stay healthy, bleiben Sie gesund – physically as well as mentally!

Have a beautiful Xmas time and a happy & healthy 2021! 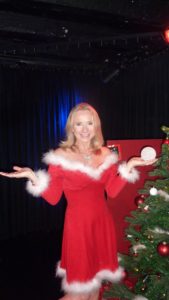 Dear friends of my Newsletter,

I keep telling my audiences my newsletter would just been sent out twice a year, one of it reaching them from Down Under: well, here we go! 🙂

After two shows at the annual Adelaide Fringe Festival I’ve been driving nearly 2000 km within a week’s time to present two shows in Melbourne and another in Newcastle, 150km north of Sydney. This last appearance during Newcastle Fringe Festival at ‚Christ Church Cathedral‘ became the Highlight of my tour: a measured humidity of 88% and the great acoustics and atmosphere made this evening in the  – like I love to say – „little sister of my beloved Cologne Cathedral, the „Kölner Dom“ incredibly special!

Here comes the link to a little snippet of the concert:

A great thank to SBS-Radio for the lovely interview (in German) and to ‚Theatre Travels‘ for the encouraging review:

A few more days Down Under are left for me now to relax, focus and collect some more creative thoughts.

Back in Germany I soon will present the German version of my latest modification of „Myth“: for example on 20th April at Ateliertheater, Cologne (www.ateliertheater.de) and on 27th April at Bandfabrik, Wuppertal (www.bandfabrik-wuppertal.de).

This year’s special of the show, beside of Piaf, Dietrich, Bardot and Loren was, that I brought some early German entries of „Le Grand Prix Eurovision de la Chanson“ – well, that’s at least how we called the „Eurovision Song Contest“ in Germany – to Australia. The contest has a pretty long reputation in Australia, the ‚Aussies‘ now being part of the show since 2015. My feeling was that my Australian audiences really enjoyed this additional aspect of „Myth“.

What I am really looking forward to as well is presenting the beauties and specialities of our lovely cities Düsseldorf and Cologne during the comical sightseeing- tour „Lachexpedition“ (www.lachexpedition.de) . My first tour back home will be on 26th April in Cologne.

You can find all my dates on my website www.sylvia-brecko.de .

Even quite a few Christmas shows are already mentioned there and I am very happy that my Christmas special “Liebling, das schenken wir uns!“ has aroused such an enthusiasm. The credit belongs as well to „Lambertz“ company, supporting this show from its very beginning on and helping to ‚sweeten‘ the evenings for my audiences with delicious old-fashioned Christmas gingerbread cookies. Special thanks to the owner of Lambertz, Dr. Hermann Bühlbecker!

And as well a huge  „Thank you“ to my loving and giving Australian audiences: you spoiled me with your claps, laughters, encore requests and even with invitations and little gifts you gave/sent me after the show: that was sooooo touching….

Well, I hope to see to all again in 2020, when I definitely will be back for another Australia Tour!

Wishing you a lovely autumn and winter in Australia 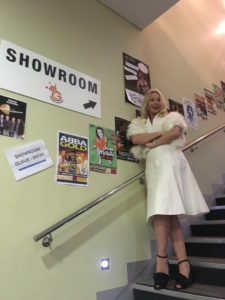 I am delighted to let all Aussie visitors of my shows know that I will be back in 2019!!!

The following shows will be open to the public:

both @ the Grand Central, Adelaide

Here comes the link for the press:

Looking forward to meet you Down Under

I am excited and delighted to let you all know that I am going to perform @ the Adelaide Fringe Festival again in 2018!

The performing dates will be 15-18 March @ 8:30pm at the GC in Adelaide (please find more information under „Termine“).

Looking forward to another great time in Australia! 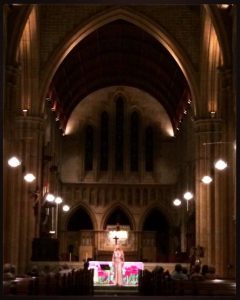 Well, folks, my last day Down Under has arrived and I’d like to express my thanks for all these beautiful impressions during the last 6 ½ weeks.

Starting and finishing with wine tasting events such as “Worlds apart” and “Wine, women and songs” with my lovely friends from Vigna Bottin.

In the intervening time I had three sell-out-shows at the Adelaide Fringe Festival and performed for the first time in the stunning atmosphere of the Christ Church Cathedral during the Newcastle Fringe Festival.

I hope to see you and all my other Aussie family and friends, which I didn’t have the time to catch up with this time, in 2018 again.

And as well I am very much looking forward to see this beautiful country with its stunning nature, its impressive ocean with great – and fortunately as well smaller surfer waves 😉 – and its lovely and enjoyable people and audiences again at my 2018 return!

Have a Happy Easter!

Please find below some information about me and my activities in English speaking countries.  For further information please feel free to contact me at anytime.

Another review of my show @ the Adelaide Fringe Festival 2016!

Sylvia Brecko is doing it HER way! There is no denying that. The former German TV host showed that she is a talented performer who is in tune with the type of humour Australian audiences respond to.

Sylvia’s stage presence is delightful – she is charming, witty and engaging. Although unfortunately she had a small audience on opening night, Sylvia performed as if it was a full house – the mark of a true professional! The theme of the show is to make the audience think about love and life and what it is to be a woman. Through the medium of comedy and self-deprecation her message comes through very clearly.

Brecko plays piano and ukulele to accompany herself in presenting the parodies. Backing tracks add to the bigger numbers. Brecko took full advantage of the lone male in the audience, eventually coercing him onto the stage for a very funny sketch which ‘John’ performed very well.

Brecko has a couple of onstage costume changes which included a Marlene Dietrich ‘tribute’’. From her first appearance in a fairly conservative outfit, Brecko builds to a a stunning 40s satin gown for the finale.

This is Brecko’s second Adelaide Fringe and she presents a show well worth seeing. Hopefully word will get around that she is back – and still doing it HER way.

I just want to let you know that I am going to perform at next years Fringe Festivals in Adelaide and Newcastle!

Here is another review of  my 2016 appearance in Adelaide:

reviewed by Barry Lenny from „Broadwayworld“

At the Adelaide Fringe Festival again!

German former TV-host, singer and actress Sylvia Brécko is set for her second Adelaide Fringe – and again she’s doing it Her Way!

A little bit Cabaret and a little bit Kabarett, her show will make you laugh about life, think about love, and wonder at what it means to be a woman.

„Funny, talented, charming. Great mix of comedy and cabaret!!“ The Clothesline Rating : 4.2. stars out of 5

Brécko’s original cabaret shows explore all facets of human interaction, in particular our relationship with those nearest and dearest to us. Her current shows “Liebling, wir müssen reden!” (“Darling, we need to talk!”) and “Liebling, wie war ich?” (“Darling, was I any good?”)  explore issues of language and communication with that very special loved one.

For Fringe Sylvia continues to explore these themes alongside issues of Women in Society and her observations of Australian mentality as compared to German attitudes to life and love.

Brécko first visited Australia in 2002, has returned ‘down under’ numerous times and continues to be fascinated by this country and its people.

She has also performed in Australia, with her first stage appearance being in 2004 in Sydney. In 2007 she hosted the gala evening of Sydney’s German-Australian Chamber of Industry and Commerce. In 2015 Sylvia had her premiere at the Adelaide Fringe Festival.        As well in 2015 she created her eveningfilling Christmas show „Liebling, das schenken wir uns!“ for her German audience.

Brécko’s shows are half spoken, half music based. She mainly performs Swing and Chanson, usually accompanied by piano or ukulele. She likes to cite smart women such as Marlene Dietrich and Edith Piaf, and has been known to sing one or two of their songs (e.g. in her 2003-07 show “Mythos” (“Myth”), which explored the life of famous women).

For her Adelaide Fringe shows songs will be sung partly in English, partly in German with translations provided before, during or after the song. 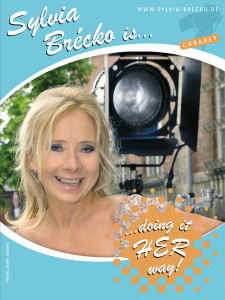 Sylvia is known as a TV-presenter and host in German TV – WDR & ARD – as well as a bilingual MC for international companies such as Siemens, Mercedes, Hewlett Packard and Rank Xerox.

Before she started her TV-career she was educated in dancing, speaking, acting and singing in Cologne, Hamburg, San Francisco and New York – one of her singing teachers being Béla Mavrak, tenor in the ensemble of Andre Rieu.

Thanks to her training she nowadays is an accomplished singer, specialised in Chanson – e.g. Marlene Dietrich and Edith Piaf – and English and German Swing Jazz. In addition she has her own Christmas-show.

In 2007 she created her first comedy show „Liebling, findest Du mich zu dick?“ – „Darling, does my bottom look big in that skirt?” – a show about the misunderstandings and differences between men and women. Her premiere in Cologne and five following shows were sold out and in January 2008 she had a successful Berlin-premiere. Sylvia toured not only throughout Germany, but also Austria, Switzerland and – since 2004 – Australia, being the MC and Entertainer for the annual gala event of the German Australian Chamber of Industry and Commerce in Sydney 2008.

Her next project was her comedy-show “Liebling, wir müssen reden!” – “Darling, we have to talk!” which was on from January 2010. This “German Kabarett” is also about relationships on the one hand, but also about the necessity of communication in life. It is more social-critical than her first comedy-show, but not missing funny and entertaining aspects.

Her current show back in Germany – part III of the „Liebling“-Trilogy – is called „Liebling, wie war ich?“/ „Darling, was I any good?

In March 2015 Sylvia made her way to Adelaide to perform her first eveningfilling comedy-show in English at the Australian Adelaide Fringe Festival, In 2016 Sylvia is back to Fringe again!!! 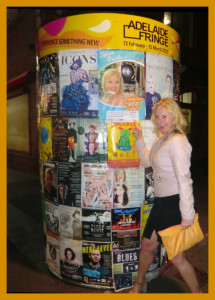 Sylvia Brécko straddles the worlds of cabaret and comedy. She is equally at ease telling amusing stories about relationships, dumb phones or Botox as she is belting out a Marlene Dietrich classic. Throw in some cleverly written ditties to the tune of popular songs and an endearing delightful manner with audiences and you a have a recipe guaranteed to keep you entertained.(…)“

„(…) Brécko’s endearing manner, great charm, intelligent and witty insights, and her powerful voice leaves the audience happy and wanting more as she sings them out the door with a beautiful French song.“ 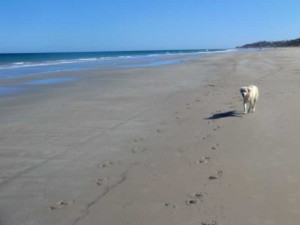